3. A gas mixture contains more than two components and the background gas contains two or more components but with similar thermal conductivity, which corresponds to two components mixture. For example, when measuring hydrogen or helium in oxygen/nitrogen. 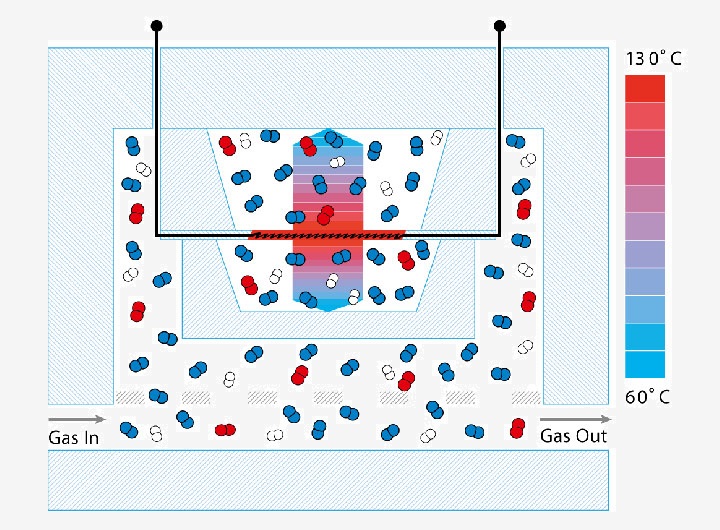 Some gases form compounds with moisture that can corrode with the sensor, thus damaging the measurement accuracy and eventually destroying the measurement capability. Therefore, MZD sensors use stainless steel and O-rings made of FPM or FFKM. And a 4µ thick protective coating of halogenated polymer layer is applied to the surface of the measurement sensor. This coating does not affect the excellent measurement performance of the sensing unit and effectively protects the sensor.

To strongly corrossive gas, measuring cell is made from Al2O3 , glass and quartz. It's can be used for high contents of Cl2 , HCl, H2S, SO2, etc.

The sensor is protected with a sintered glass of µm pore size, through which gas molecules can pass, while liquid water molecules can not penetrate. In addition the sintered glass protection layer reduces the dependence on the gas flow, so that the sample gas flow can be 10 to 400 L/h through the thermal conductivity cell.

High temperature sensor with thermostat-controlled gas paths up to 180°C can be used for high dew points and/ or to avoid possible salification.

The presence of interfering components in the sample gas is an important factor in generating additional error, which is almost negligible for most gases when the concentration is low. Complex gas mixtures can be fully determined by cross-sensitivity modeling and other measurements. Even IR and humidity measurements can be used to compensate for the arithmetic, allowing for an integrated solution for determining homonuclear and rare gases in complex gas mixtures.

The instrument has 16 built-in binary gas mixture measurement modes and calibration data, so that different gases and gas mixtures can be measured using the same instrument.

Thermal conductivity gas analyzers are an effective method for measuring a component of two gas mixtures (with very different thermal conductivities). It is mainly used to measure the content of hydrogen (H2), carbon dioxide (CO2), argon (Ar), etc. Some typical applications are listed below.

PREVIOUS : NONE NEXT : Applications of Thermal Conductivity Analyzer
﻿